In the beginning there was Simula - designed by Kristen Nygaard and Ole-Johan Dahl at the Norwegian Computing Center in the 1960s, the first language to introduce the techniques now known as Object-Oriented Programming (OOP). Spreading from the use of Simula in an expanding range of applications, OOP has achieved great importance with the commercial success of languages like Java, C++, Smalltalk, and Eiffel. Now, from the birthplace of OOP, comes the BETA programming language, for which this book is the definitive guide.

Highlights of the book include:

Programmers who wish to keep up-to-date with new developments in object-oriented technology and students taking OOP courses using BETA will benefit from this clear account af OOP techniques and applications.

Ole Lehrmann Madsen is a Professor of Computer Science at Aarhus University in Denmark, director of the Alexandra Institute A/S, and cofounder of Mjølner Informatics A/S, distributors of the BETA software.
Birger Møller-Pedersen is a principal resear-cher at Ericsson Research, Applied Research Center, Oslo, and Associate Professor of Informatics at the University of Oslo, and has been active in the development of BETA.
Kristen Nygaard, Professor of Informatics at the University of Oslo in Norway, was the designer of Simula and co-developer of BETA, and is widely regarded as the father of object-oriented programming.

The first edition of this book from Addison-Wesley [Photo of original book (JPG, 162Kb)] is sold out by the publisher.
With permission from Addison Wesley, Mjølner Informatics has made a reprint as of August 2000. The reprint is available for download and in hardcopy. For hardcopy, please contact sales@mjolner.com.

You can download the book and the color cover in PDF (Portable Document Format). To view these files you will need the Adobe Acrobat Reader: 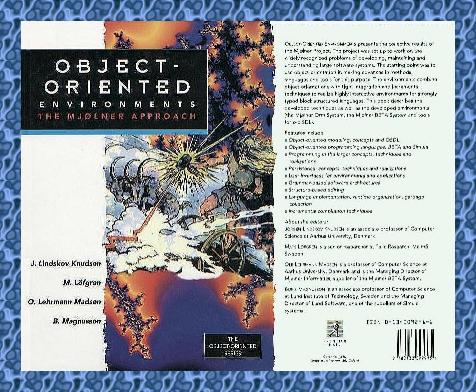 The book "Object-Oriented Environments - The Mjølner Approach" presents the collective results of the Mjølner Project. The project was set up to work on the widely recognized problems of developing, maintaining and understanding large software systems. The starting point was to use object-orientation in making advances in methods, languages and tools for this purpose. The environments combine object-orientations with tight integration and incremental techniques to realize highly interactive environments for strongly typed block structures languages. This book describes the developed techniques as well as the developed environments (the Mjølner Orm System, the Mjølner System and tools for O-O SDL).

Notice: The book is currently sold out. It is unknown whether more copies will become available.